You are here: Home1 / Services2 / Especially for Teens3 / Birth Control

What things should I think about when choosing a birth control method?

To choose the right birth control method for you, consider the following:

Which birth control methods are the best at preventing pregnancy?

The table below shows all of the birth control methods and how well they protect against pregnancy.

What is the birth control pill?

The birth control pill is a pill that you have to take every day at the same time each day. It contains hormones that prevent pregnancy. There are many types of birth control pills. A health care professional can help you choose the right one for you.

If you miss a pill, you need to know what to do. Read the directions that came with your pack of pills. You also may want to contact your health care professional. 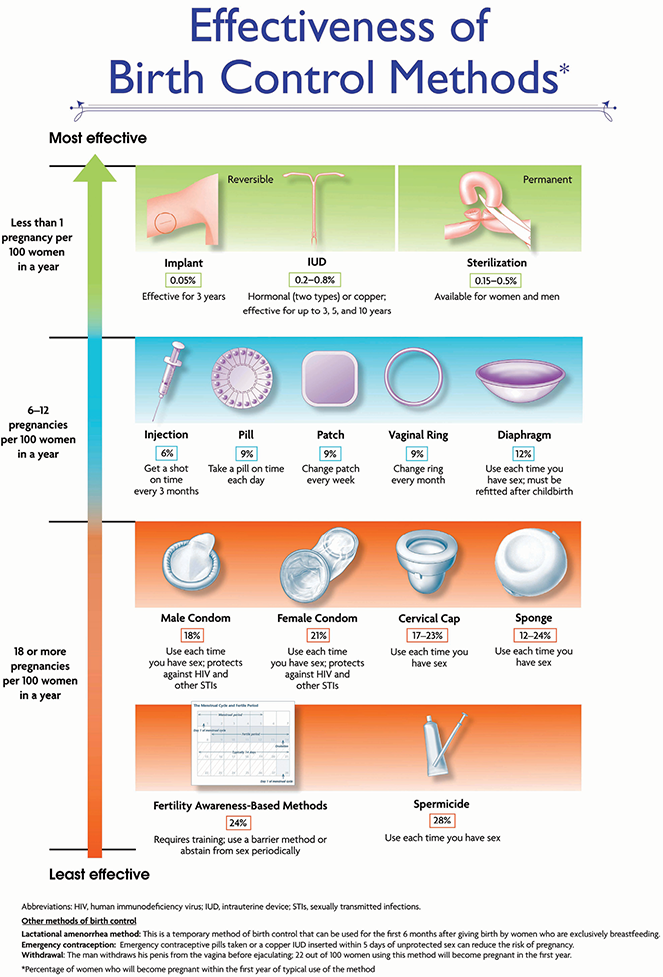 What is the skin patch?

The patch is a small (1.75 square inch) adhesive patch that is worn on the skin. It contains hormones that are slowly released into your body through the skin. A new patch is worn for a week at a time for 3 weeks in a row. During the fourth week, a patch is not worn, and you will have your menstrual period.

What is the vaginal ring?

The ring is a flexible plastic ring that you insert into the upper vagina. It releases hormones into your body. It is worn inside the vagina for 21 days and then removed for 7 days. During those 7 days, you will have your menstrual period. Then you insert a new ring.

What is the birth control shot?

This shot is given in the upper arm or buttock every 3 months. It contains hormones that prevent pregnancy.

What is the implant?

The implant is a small plastic rod about the size of a matchstick that a health care professional inserts under the skin of the upper arm. It releases hormones. The implant protects against pregnancy for 3 years.

What is the intrauterine device (IUD)?

The intrauterine device (IUD) is a small, T-shaped, plastic device that is inserted and left inside the uterus. The IUD must be inserted and removed by a health care professional. Three types are available in the United States. Two contain hormones and last for 3 years and 5 years. The third type is the copper IUD. It lasts for as long as 10 years.

These are chemicals that are put into the vagina to make sperm inactive. There are many types of spermicides: foam, gel, cream, film (thin sheets), or suppositories (solid inserts that melt after they are inserted into the vagina).

Frequent use of spermicides may increase the risk of getting human immunodeficiency virus (HIV) from an infected partner. Spermicides should only be used if you are at low risk of HIV infection.

Condoms come in male and female versions. The male condom (“rubber”) covers the penis and catches the sperm after a man ejaculates. The female condom is a thin plastic pouch that lines the vagina. It prevents sperm from reaching the uterus. Condoms work better to prevent pregnancy when used with a spermicide. Spermicides should only be used if you are at low risk of HIV infection.

What is the diaphragm?

The diaphragm is a small dome-shaped device made of latex or silicone that fits inside the vagina and covers the cervix. You need a prescription for it. A health care professional needs to do a pelvic exam to find the right size of diaphragm for you. It always is used with a spermicide. Birth control methods that need spermicides to work should only be used if you are at low risk of HIV infection.

What is the cervical cap?

The cervical cap is a small, thin latex or plastic dome shaped like a thimble. It fits tightly over the cervix. You need a prescription for it. A health care professional needs to do a pelvic exam to find the right size for you. The cervical cap must be used with a spermicide. Birth control methods that need spermicides to work should only be used if you are at low risk of HIV infection.

What is the sponge?

The sponge can be bought without a prescription at drugstores and other stores. It is a doughnut-shaped device made of soft foam that is coated with spermicide. It is pushed up in the vagina to cover the cervix. Birth control methods that have spermicides should only be used if you are at low risk of HIV infection.

What is emergency birth control?

What are the types of emergency birth control pills?

Where can I get emergency birth control?

Cervix: The lower, narrow end of the uterus at the top of the vagina.

Pelvic Exam: A physical examination of a woman’s reproductive organs.

Sperm: A cell produced in the male testes that can fertilize a female egg cell.

Uterus: A muscular organ located in the female pelvis that contains and nourishes the developing fetus during pregnancy.

Vagina: A tube-like structure surrounded by muscles leading from the uterus to the outside of the body.

Designed as an aid to patients, this document sets forth current information and opinions related to women’s health. The information does not dictate an exclusive course of treatment or procedure to be followed and should not be construed as excluding other acceptable methods of practice. Variations, taking into account the needs of the individual patient, resources, and limitations unique to the institution or type of practice, may be appropriate.